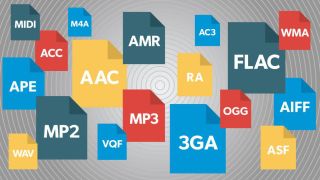 Organising your digital music collection, you might be struck by the number of different audio file formats in your library. Almost everyone's heard of MP3, but what about OGG, AIFF or MQA?

If the list leaves you wondering whether all those songs studied at different universities to get such official-looking letters after their names, don’t worry. We’re here to break down the meaning of the most common music file formats, the differences between them, and why you should care.

Whether you're listening to low-quality MP3 files, probably slightly better AAC tracks, or hi-res audio in FLAC or WAV, it's time to understand exactly what you're getting – and which is the best file format for you.

Read on to learn about the pros and cons of each audio file format...

Want to cut straight to the chase? Here's a handy guide to all the file formats and the differences between them. If you want to know more, read on below for a more in-depth look at the differences in size, sound quality and compatibility.

AIFF (hi-res): Apple's alternative to WAV, with better metadata support. It is lossless and uncompressed (so big file sizes), but not hugely popular.

DSD (hi-res): The single-bit format used for Super Audio CDs. It comes in 2.8mHz, 5.6mHz and 11.2mHz varieties, but due to its high-quality codec, it’s (currently) impractical for streaming. Uncompressed.

FLAC (hi-res): This lossless compression format supports hi-res sample rates, takes up about half the space of WAV, and stores metadata. It's royalty-free and is considered the preferred format for downloading and storing hi-res albums. The downside is, it’s not supported by Apple (so not compatible with iTunes).

OGG (not hi-res): Sometimes called by its full name, Ogg Vorbis. A lossy, open-source alternative to MP3 and AAC, unrestricted by patents. The file format used (at 320kbps) in Spotify streaming.

WAV (hi-res): The standard format in which all CDs are encoded. Great sound quality but it's uncompressed, meaning huge file sizes (especially for hi-res files). It has poor metadata support (that is, album artwork, artist and song title information).

WMA Lossless (hi-res): A lossless incarnation of Windows Media Audio, but no longer well-supported by smartphones or tablets.

First, let’s talk about the three categories all audio files can be grouped into. It comes down to how compressed the data is (if at all) and as a result, how much quality or “loss” you’ll experience, as a listener.

If no compression algorithm (or codec) has been used to compress the audio within your file, two things happen: zero loss in sound quality, and soon-enough, a “startup disk full” warning on your laptop.

Essentially, an uncompressed track is a reproduction of the original audio file, where real-world signals are transformed into digital audio.

WAV and AIFF are arguably the most popular uncompressed audio file formats, both based on PCM (Pulse Code Modulation), which is widely recognised as the most straightforward audio storage mechanism in the digital domain. Both WAV and AIFF files use similar technology, but store data in slightly different ways. They can store CD-quality or high-resolution audio files.

WAV was developed by Microsoft and IBM, hence it's used in Windows-based platforms, and is the standard format all CDs are encoded in.

AIFF was developed by Apple as an alternative to WAV, and although not as widely popular, AIFF files have better metadata support, meaning you can include album artwork, song titles and the like.

The drawback? These babies are big. A CD-quality (16-bit, 44.1kHz) file will take around 10MB of your hard drive per minute in length.

Everyone loves a FLAC. A lossless file, the FLAC (Free Lossless Audio Codec) is compressed to nearly half the size of an uncompressed WAV or AIFF of equivalent sample rate, but there should be no “loss” in terms of how it sounds. FLAC files can also provide a resolution of up to 32-bit, 96kHz, so better than CD-quality.

Other lossless audio file formats include ALAC (Apple Lossless) and WMA Lossless (Windows Media Audio). The former is a good iOS and iTunes compatible alternative to FLAC, although the files are slightly less compact than FLACs. Check for smartphone and tablet compatibility, though.

Who’s heard of an MP3? Course you have. Easily the most common audio format, MP3s are convenient for storing music on iPods or tablets and work on almost all playback devices. But to do that, you have to lose a load of information in the process. In order to make audio files up to ten times smaller than CD quality files, some original data must be discarded, resulting in a loss of sound quality.

The bit-rate at which an MP3 is recorded also affects the sound quality. MP3s encoded at 128kbps will incur more sound loss than those encoded at 320kbps (kilobits per second, where each “bit” is essentially a “piece” of the song). Now that storage is so much cheaper, we'd avoid 128kbps at all costs, though 320kbps MP3s still have their purpose if your storage is limited - and they remain a standard on download stores.

Another lossy format is AAC (Advanced Audio Coding) which is compressed much like an MP3, but it’s slightly more efficient and sounds better. AAC is used for iTunes downloads, Apple Music streaming (at 256kbps) and YouTube streaming.

The Vorbis format, often called Ogg Vorbis owing to its Ogg container, is a lossy, open-source alternative to MP3 and AAC, unrestricted by patents. Ogg Vorbis is the file format used (at 320kbps) in Spotify streaming.

If you’re sticking with lossy, it’s worth remembering this: while more “bits” usually means better sound, it depends on the efficiency of the codec in your file. Although you might notice that much of the music in your collection is encoded at 128kbps so should be much of a muchness, an MP3 will likely sound a fair bit (see what we did there?) worse than an AAC or Ogg Vorbis file, due to the inefficiency of the codec in an MP3.

What about high-resolution audio?

Unlike high-definition video, there’s no single universal standard when it comes to high-resolution audio.

However, in its simplest terms, hi-res audio tends to refer to music files which have a higher sampling frequency and/or bit depth than CD – which is specified at 16-bit/44.1kHz. Hi-res files therefore come in the form of 16-bit/96kHz or 24-bit/192kHz, for example.

So why should you care? Quite simply, hi-res audio files, with all that extra audio information, should sound a lot better than compressed audio formats, which lose information in the compression process. They will take up more storage space but we definitely think it's worth the trade off.

Uncompressed files like AIFF and WAV are hi-res, as are those lossless FLAC and ALAC file formats. DSD (the somewhat niche format used for Super Audio CDs) is also hi-res, but it’s not as widely supported. When it comes to streaming, MQA is a file packing format used by the likes of Tidal Masters, which helps to bring hi-res audio to streaming services using as little bandwidth as possible.

As for playing hi-res audio, an increasing amount of products now support it. Denon's HEOS wireless speakers support playback of 24-bit files, as do premium portable music players such as the Award-winning Cowon Plenue D2 and Astell & Kern A&norma SR15.

Hi-res audio can also be played on most flagship Android smartphones such as the five-star Samsung Galaxy S10+, but you can’t play hi-res on a box-fresh iPhone. We’ve found ways around that, but it’s worth remembering that hi-res audio isn’t quite as portable as its lossy brethren – yet. You can find more info on which hi-fi products support hi-res audio here.

Which is the best audio file format for you?

The file format you choose will depend on whether storage or sound quality is your key concern, as well as which devices you intend to use for playback.

MP3s became hugely popular when storage was at a premium. Now that phones, music players and laptops have far more storage space, we think you really should be looking to use better-than-CD-quality files.

If you’re archiving your audio files, a FLAC or other lossless file might be a good shout for ripping your music, though. Lossless files strike a good balance between compression and sound quality, allowing you to listen to the best quality digital music without taking up all your storage space. Just make sure your devices are all compatible with your file format of choice.