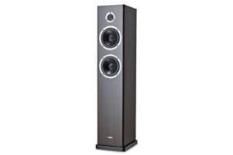 Much to like but not quite the sonic all-rounder

It's been a while since we've seen a pair of floorstanders from Acoustic Energy. The company likes to take its time with a new model launch, which seems eminently sensible, and the last range – Radiance – came to us in the form of the baby bookshelf, the Radiance 1.

The Neo V2 range has a new set of finishes, high-end crossovers and newly designed drivers. The crossovers feature polypropylene capacitors and new inductors on the tweeter, which AE suggests should make for a sweeter, faster top end, while revised suspension on the larger mid/bass drivers aims at tighter basslines.

First things first; we have to attach the speaker platform, which screws in to four small holes in the rear of the speaker, and then four spikes.

They cut a smart enough appearance in this ‘vermont' walnut finish, though some of the cabinet edges could do with smoothing over – but, hey, you don't get many good-sounding floorstanders for this money.

Impressive bass delivery
We're certainly impressed with the bass delivery; the tweaking does seem to have resulted in bottom-end notes that are tight and musical, though the weight on The Chemical Brothers' Swoon is nothing to shout about.

Vocals have emotion and space, as Plan B's Love Goes Down demonstrates, and drums are clean and punchy.

There's a hint of edge to certain frequencies however, and a soothing bout of acoustic piano is interrupted by the odd grating note. This edge seems to be doing its best to make up for what is an occasionally downbeat delivery.

There's plenty to enjoy in the AE's delivery, especially when that treble brightness keeps its head down, but we'd like a bit more get up and go to push these speakers into five-star territory.