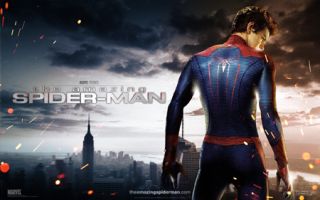 Welcome to The Week in HD, our guide to all the must-see high-definition TV shows, films, sports and Blu-rays to grace your screen over the next seven days.

A new record was set last weekend, with Sebastian Vettel becoming the youngest-ever F1 driver to win three titles back-to-back, after a nail-biting and drama-filled race that saw Jenson Button win, Lewis Hamilton ending his McLaren career on an anti-climax, and Michael Schumacher once again retiring from the sport.

There's plenty to watch this week, but more importantly - it's December at the weekend! This means it's officially Christmastime, so to get into the festive mood, why not take to the comments section and let us know your favourite Christmas films and TV specials, and what you're looking forward to watching over the festive season :)

The reboot of this particular Marvel superhero franchise raised a few disgruntled eyebrows, but Andrew Garfield and Emma Stone steal the show by being utterly charming. Among heavyweights such as Avengers and Batman, this is a more light and personal story charting how young Peter Parker got his powers, his relationship with Gwen Stacey, and finding out why his parents disappeared, while battling Rhys Ifans in Lizard form. There's also some great web-swinging action that looks well exciting in 3D.

Merida wants nothing more than to run around the Scottish Highlands, practising her Hawkeye/Katniss-like archery skills. Her mother, on the other hand, wants her to be the perfect little princess. At cross purposes, Merida curses her mother into a bear, and they must heal their relationship to break the curse. Pixar's outdone themselves with the animation, with stunning scenery looking near-realistic and Merida's mass of fiery curls looking delightfully tangible.

Another round of ten more chefs hoping to impress the judges with a dish made from just seven ingredients: beef mince, wild mushrooms, an aubergine, red wine, brioche, pears, and almonds. Sounds delicious.

Our beloved QIMaster plays around with some nifty innovations and gadgets aimed to make modern life more comfortable and fun, such as shopping and cooking. Famous friends on the menu today include Derren Brown and Jo Brand.

Skills test today is cooking a crepe souffle in 15 minutes, then a classic sweet and spicey mutton pie for Michel Roux Jr.

Dara O Briain explores the best of all science: space science! With a group of experts, he discusses the possiblity of aliens and the effects of radiation on the human body, while comedian Josh Widdecombe visits NASA, and a space suit is taken apart. And no space news is complete without some Mars Curiosity news.

Directed by Murray Lerner, this film showcases one of Jim Hendrix’s final concerts, featuring Foxy Lady, Purple Haze, In From the Storm, and so much more.

Music – a universal language. We often turn to it when words aren’t enough, when emotions aren’t enough. Alan Yentob speaks to a variety of people – musician, composer, psychologist, vicar – to understand the power of music to affect people in different ways.

Time is certainly wibbly-wobbly in this cult classic about a troubled teenager who narrowly misses being crushed to death by a plane engine, resulting in a series of bizarre events, not least the creep-as-hell six-foot tall rabbit named Frank, who prophecises the end of the world. With Jake Gyllenhaal, Drew Barrymore, Patrick Swayze, Mary McDonnell and Maggie Gyllenhaal.

It’s Christmas time at Lime Grove, but it’s not all merry and jolly. Randall tells Lix why he’s really back, Bel and Freddie try to find out what happened to the missing Kiki, and Hector spirals even more out of control.

The remaining six chefs have to pull out all the stops to create two dishes for the three hard-to-please critics, with only two going through to the semi-finals.

Wrapped Up In Death. One for the Indiana Jones fans, this mystery has a Mayan tomb, a museum curator crushed to death by a falling gargoyle, and the inevitable mummy curse. Beckett and her team tread around a multitude of homage and tropes, as Castle believes he’s been a victim of the mummy’s curse...

The BBC's three-part adaptation of James Herbert’s supernatural novel comes to its conclusion tonight, with a Crickley Hall expert called in to rid the house of its menacing ghost. But as Eve comes close to finding her missing son, the rest of her children are under threat…

Find out which of Britain’s finest funny-people have been nominated for the 2012 British Comedy Awards, with plenty of comedy clips and interviews accompanying the announcements.