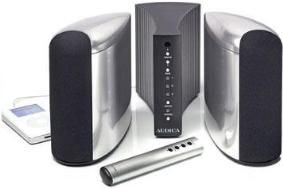 We gave the MPS-1 system five stars when we originally reviewed it back in June 2006, and although it's now discontinued, it's still a great little system. It can be used with all portable or desktop media players and computers.

Power output is a claimed 2 x 25W, and each speaker is fitted with two 5cm drive units.

You can also buy the Audica MPS-1 at Richer Sounds and Amazon. But stocks are limited as manufacturing of the MPS-1 has now ceased. So if you want one, you'll have to be quick.