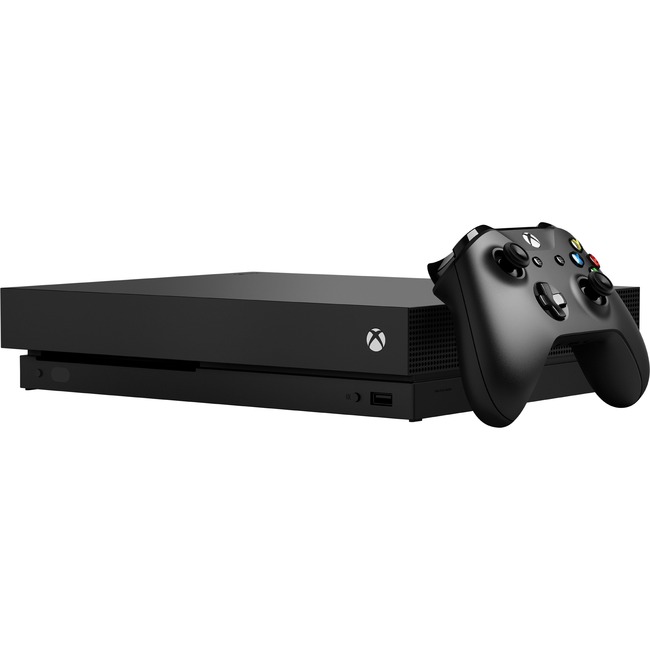 Games play better than ever Play on Xbox Live, the most advanced multiplayer network Works with all your Xbox One games and accessories Games run smoothly, look amazing, and load quickly on 1080p screens The world's most powerful console Games play better on Xbox One X. With 40% more power than any other console, you'll experience truly immersive 4K gaming. Unprecedented performance Xbox One X unleashes 6 teraflops of graphical processing power, making games perform better than they ever have. Maximize game performance with the speed of 12GB GDDR5 graphics memory, and see every frame with 326 GB/sec memory bandwidth. Feel True Power Immersive 4K gaming Lose yourself in worlds built for true 4K gaming, where action comes to life with 2160p frame buffers and 6 teraflops of graphical processing power. And experience premiere sound that puts you in the center of Spatial Audio. 4K Blu-ray and streamingWatch Blu-ray movies in stunning 4K Ultra HD and stream 4K video on Netflix, Amazon, and more. Plus, stream and record game clips in 4K at screaming-fast 60FPS. The benefits of HDR Experience richer, more luminous colors in games like Forza Motorsport 7 and Crackdown 3. With a higher contrast ratio between lights and darks plus Wide Color Gamut, HDR technology brings out the true visual depth of games. Play with the greatest community of gamers on Xbox Live Xbox LiveFind friends, rivals, and teammates in the best global gaming community. Dedicated Xbox Live servers maximize performance by ensuring stability, speed, and reliability. Compete, connect, and share across platforms with gamers on Xbox One and Windows 10. Benefits of GoldWith 2-4 bonus games each month, Games with Gold offers a significant value in bonus games during a year of membership. Plus, Deals with Gold provides exclusive discounts with savings up to 50-75% on games, add-ons and more. Xbox Game PassEnjoy unlimited access to over 100 great Xbox One and Xbox 360 titles, including fan favorites like Halo 5: Guardians, Payday 2, NBA 2K16, and LEGO Batman. The biggest blockbusters perform betterAll games look and play great on Xbox One X. But select Xbox One X Enhanced titles are optimized to take full advantage of the world's most powerful console. Compatible with everything Xbox One Play Original Xbox games on Xbox One XThe future of gaming does not forget its past. Play hundreds of Xbox 360 games and, coming soon for the first time, classic Original Xbox games on Xbox One X. Experience game franchises across generations and enjoy the titles you own and love at no additional cost. And games on Xbox One X look great even on a 1080p screen.Compatible with Xbox One games and accessoriesKeep playing the games you've got. All blockbuster titles, console exclusives and over 300 Xbox 360 games play even better on Xbox One X. Plus, all Xbox One accessories work with Xbox One X. Bring your community All your Xbox Live friends, clubs, game saves, and achievements move seamlessly to Xbox One X.

‹ Back to Microsoft products

‹ Back to Microsoft Games consoles