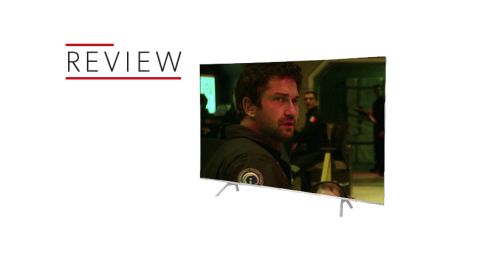 Given its size, price and all-round picture quality, the Samsung UE65MU7000 is an absolute belter.

Size might not be everything. But if your heart is set on a really big TV, nothing else will do. Of course, really big TVs often require really big bank accounts - particularly if you want the latest TV tech.

But not always. This Samsung UE65MU7000 proves that it’s possible to get a really good, really big, TV for not far north of £1500.

So what are you missing out on with a 65in TV at the more affordable end of the spectrum?

It’s not an OLED - Samsung doesn’t make those, and it isn’t one of the company’s fancy QLEDs either.

Instead, what you’re getting is a TV from the everyday MU range, albeit from the higher-end 7000-series. The key difference between this and a QLED is the lack of quantum dots. Instead, this and other MU models use a standard LCD panel and LED backlight, which suggests colours will be less vibrant and contrast less striking than with a QLED or OLED alternative.

The UE65MU7000 also foregoes an Ultra HD Premium badge, as does every other non-QLED Samsung in 2017 - although this is more about marketing.

Samsung says the MU7000 meets the specification, and that it has simply chosen not to license the certification for any model that isn’t a QLED.

To an extent you’re missing out in the looks department too, as the MU7000 lacks the super-skinny bezel of its QLED brethren and instead sports a silver lip along the bottom of its frame.

The stylish, QLED-exclusive, three-pronged pedestal is also missing, replaced by two feet that can each be installed in two different positions along the bottom of the set.

With the MU7000, you get a One Connect box to house your connections, but it’s not the same version as with the QLEDs - it's smaller, more plastic-y and lacks the thin umbilical, the ethernet and third USB socket of the QLED version. Instead they are located on the rear of the set.

On the plus side, this One Connect box is not only much smaller than the QLED version but is also relieved of the need for its own power cable - so it's far easier to hide.

You also get exactly the same operating system as every other 2017 Samsung. The OS is slick and super-snappy to use, colourful, customisable, intuitive and laden with apps.

This is the current benchmark for both ease of use and breadth of available content, from Amazon and Netflix, to Now TV and Google Play Movies and TV.

Samsung’s thoughtful streamlining extends to the initial set-up, which includes such treats as background tuning of channels so you don’t have to twiddle your thumbs while a percentage bar fills.

The picture calibration options have been reduced and refined (Sony and LG, take note), and this means you’ll be up and running in no time at all.

That isn’t to say the picture settings are perfect out of the box – some of the THX Optimizer disc-assisted tweaks are still worth it. Between this and a lot of real-world testing, we find ourselves taking a few points off Contrast, Brightness and Sharpness, and turning the Contrast Enhancer off entirely.

You may also want to experiment with the Auto Motion Plus setting too. We’d recommend either switching it off entirely or using the Custom mode to add just a few points of Blur- and Judder-reduction.

Bear in mind these tweaks will be ignored when you feed the TV an HDR signal, as the TV switches to a different set of defaults.

The good news is this set of defaults is pretty spot-on for HDR, with it only really being necessary to adjust motion processing to your preference.

This TV supports both 4K and HDR (both HDR10 and HLG) so you’re naturally going to make a beeline for some content that delivers both, such as Defenders from Netflix or Planet Earth II on 4K Blu-ray.

The MU7000 does a fabulous job with this content. The highlights are brighter when viewed on a QLED but the MU7000 is punchy enough, backing up Samsung’s claim that it surpasses the UHD Premium specification.

It’s a vibrant image with real depth to colours, which means the jungles in Planet Earth II are lush and moist and dense. Insight is a little better from a Q7F set, but blacks are pure, detail is abundant in bright areas, and edges are crisp and sharply defined.

This is a solid, three-dimensional picture that pops from the screen and draws you in. It might not have that extra sparkle that a QLED delivers but, that aside, it’s an extremely hard picture to find fault with - which is mighty impressive given the asking price.

Switching to Fantastic Beasts And Where To Find Them, we’re presented with a more subdued picture with fewer picture-boosting modes enabled.

It’s an immediately likeable image, boasting deep colours and more than enough insight to make the most of the exceptionally detailed transfer.

Freckles and wrinkles missed by smaller and/or less capable sets are revealed, prohibition-era New York is rendered in all of its grey, foreboding glory, and the creatures of JK Rowling’s imagination look as real and tangible as is possible.

The motion-handling here is typical of what we’ve seen from other Samsungs this year - it’s just a little blurry compared to Sony’s equivalent, but perfectly decent in its own right.

MORE: Fantastic Beasts And Where To Find Them Blu-ray review

We also spot the faintest hint of backlight clouding in the top-right quarter of our sample, but it’s barely noticeable (even in a completely unlit room) and not something you’re likely to find bothersome.

The fact this backlight is almost entirely even across 65 diagonal inches is mightily impressive, especially given the price.

Of course, the fact that there’s a backlight in play at all could be considered a weakness in this OLED era, and you’re certainly made aware of its presence as the black bars top and bottom go a little grey when bright, centre-screen action is lit. But even the most affordable 2017 LG OLED will set you back at least £150 more than the MU7000 – and it’s 10in smaller.

This is just a likeable, enjoyable, natural and all-round balanced picture. Even standard-def content via the tuner looks decent, with better control and clarity than you might reasonably expect at this size and price.

Gamers should be happy, too, as the MU7000 has a super-low input lag. We measured 22.9ms here, which is low enough to be entirely unnoticeable.

After all these positives, it’s a shame the audio is fairly poor.

The Standard mode is quite muggy and woolly, with artificial bass depth clearly favoured over clarity. Optimised mode, meanwhile, over-eggs things somewhat, albeit in a way that can sometimes work for action films and shows.

However, the fact that the MU7000 sounds quite poor shouldn’t put you off. As ever, we recommend a separate sound-system of some kind.

This is not simply a good TV – it’s an excellent TV for the money.

It gives surprisingly little away to the QE65Q7F, which costs around £1000 more - and the equivalent LG OLED (OLED65B7), though admittedly a step up, will set you back £2800.

But if your budget isn’t able to stretch that far, the Samsung UE65MU7000 is a fine alternative.