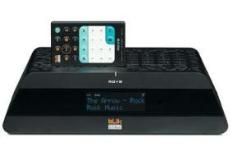 Offers plenty and delivers with aplomb in almost every way; for £150 we think it’s a steal

Revo has reminded us what it is to be spoiled by choice. The Blik RadioStation has it all – an internet radio, FM and DAB tuners (it even supports DAB+), plus wireless media-streaming functionality. Oh, and there's an auxiliary input for your MP3 player, and indeed phono outs to connect it to a hi-fi system should you feel the need.

It's all packaged rather nicely, too – despite not feeling particularly substantial, the RadioStation is smart. It's lithe, light and looks the part in an understated matt black finish (there's a white version available as well). It's easy enough to set up, too; follow the simple steps and it'll simply latch on to your wi-fi network.

Controlling the unit comes via a credit-card-sized remote control or the normal array of buttons atop the unit itself. There's an LCD screen showing you what you're listening to, though the menu systems aren't the most intuitive to get to grips with.

Lack of grunt
The all-important sound quality is where things get a little less hunky-dory. It's inoffensive enough, but there's a serious lack of bottom-end grunt, as well as a general untidiness to the sound. Crank the volume for a bit more clarity and you will find the Blik brightens a touch, too.

Being able to stream music from your PC or Mac is a superb added feature; again, it works smoothly and produces a decent sound. The RadioStation can deal with MP3 and WMA files only, however, so if you rip your music in AAC, Apple Lossless, WAV or FLAC – as we'd recommend – then you're in trouble. Still, at £150, there's plenty going for it.