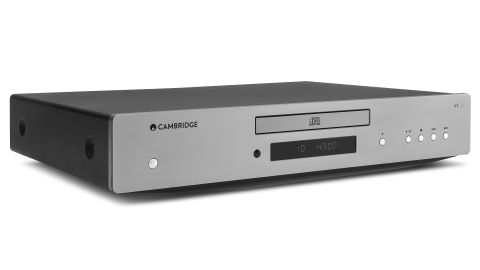 If the Cambridge Audio’s purposeful, minimalist build works for you, it’s a capable contender

Cambridge Audio’s AX series launched last summer; a six-strong line-up of hi-fi separates aimed at the more modest end of the market, with each one coming in at under £450.

With an asking price just shy of £300, the AXC35 CD player is actually the pricier of two compact disc spinners in the range. We really liked the AXA35 amplifier, so how will the accompanying CD player fare under scrutiny?

Those familiar with the British firm’s five-star AXA35 amplifier from the same AX series will note the AXC35’s near identical dimensions, colour scheme and looks.

This slimline CD player stands just 7.5cm tall, and though we don’t recommend stacking your hi-fi components, its stackable dimensions are no bad thing provided you’re on board with the understated, purposeful aesthetic that typifies the series.

For the design minimalist, there are refreshingly few flourishes to the AXC35’s build, and this carries through to the accompanying remote control.

As with the AXA35, the system remote that comes with the Cambridge Audio AXC35 looks like an entry-level DVD player remote minus some of the buttons. If you run your thumb along it, you can even feel through the top cover where the holes for the missing buttons are. It’s perfectly functional but strays somewhat into corner-cutting territory.

Otherwise, there’s a central, bright, pleasing dot matrix display, five circular buttons for power, eject, play/pause, track skip and stop on the right side of the unit, and a power button on the left that has a subtle light in its centre. The display doesn’t provide CD text, but at this level, that’s hardly an issue.

Around the back, aside from the line outputs and AC power cable, a coax digital output (for input to a separate DAC or digital recording machine) completes the list of connections. The inclusion of coax is the main difference between the AXC35 and the cheaper AXC25.

There’s no optical out and no USB in (for the connection of Apple products or a USB memory device, for example) as seen in the Award-winning Marantz CD6006 UK Edition player, but at this level, Cambridge Audio has done enough to just about cover the necessary bases.

We begin listening to Hans Zimmer’s Angels & Demons soundtrack. The building bass and choral voices in 160 BPM are quite open and easily distinguishable as instruments alongside textured, human voices.

The driving drum fills and layered, pensive cellos are held in check and relayed with a pleasing musical cohesion as the player proves to be dynamically adept across the frequencies. As the album continues to God Particle, we notice that the AXC35 doesn’t lose its cool over faster time signatures, delivering a sparkling, percussive rhythm through the treble, underpinned by the foreboding male bass vocals.

We load Prince & The NPG’s 1991 album Diamonds And Pearls into the AXC35 and from the outset of Thunder until the final track, Live 4 Love, we’re presented with a capable performance that isn’t afraid to go big.

The Cambridge Audio player’s main problem is that it’s up against the truly great Marantz CD6006 UK Edition.

We cue up Aerosmith’s 2005 album, Rockin’ The Joint, and glean more subtlety in Steven Tyler’s moxie-laden vocal and greater dynamic fluidity in Joe Perry’s axe from the Marantz. The CD6006 UK times marginally better too, with Walk This Way feeling slightly more gripping and exciting, from the classic guitar riff through to Tyler’s almost rapped vocal.

A few years ago, when the Marantz product would have set you back closer to £400, this would hardly be a fair comparison. In 2020, however, the 2019 Award-winner can be bought for the same price as this new Cambridge Audio model.

Cambridge Audio has delivered a slim, fuss-free CD player that fits beautifully within its AX range. It presents enough clarity and detail for a perfectly capable, listenable sound at the price.

However, it is up against a 2019 Award-winner – a product that feels more luxurious, is better equipped, has more sophistication and sounds better across the board.