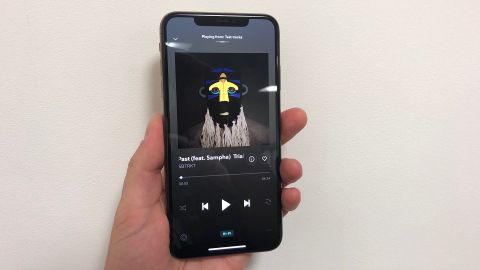 For anyone who uses a smartphone as a mobile cinema screen, the boast of having the ‘biggest display ever on an iPhone’ immediately makes the iPhone XS Max a source of serious excitement.

The idea of a scaled-up iPhone X is appealing and, with this being one of Apple’s generally small-step ‘s’ years, it comes as a pleasant surprise that the XS Max goes a few steps further in terms of picture and sound, making it comfortably the best smartphone out there for movie and music lovers.

Unsurprisingly, this is a large phone and, for some, the standard iPhone XS will provide the perfect ratio of chassis to screen. But if you’re already used to the dimensions of Apple’s Plus-sized iPhones, you’ll have no trouble getting to grips with the Max. You will also benefit from a larger and better screen.

The XS Max looks and feels suitably premium. The combination of a virtually bezel-less OLED screen, curved stainless steel edges and glossy glass is as appealing as ever. We rather like the new gold finish, too, which has a warm, copper-like hue and joins the existing silver and Space Grey options.

The beauty is combined with an extra helping of toughness. Apple claims the rear glass panel is its most durable to date. The XS models are IP68-rated, and are therefore able to survive a dunking. Apple has even tested the XS’s ability to resist other liquids, including wine and beer. A quick rinse is enough to return a beer-soaked XS to fighting fitness: no kebab or bloody Mary necessary.

But the biggest feature here is that huge screen: 6.5in of OLED, which is not only 0.7in bigger than the standard iPhone XS and X. It’s also a bigger screen than the ones on the Samsung Galaxy S9 (6.2in) and Note 9 (6.4in).

Apple has increased the resolution too, so the pixel density of the iPhone XS Max’s screen is identical to that of the smaller iPhone XS and X, at 458ppi. Both of the new phones boast a 60 per cent increase in dynamic range over the X. Combined with support for HDR10 and Dolby Vision, it should make the perfect foil for HDR movies on the move.

Powering the iPhone XS Max is Apple’s new A12 Bionic processor, the world’s first seven nanometre chipset. It crams in 6.9 billion transistors, making it faster and more powerful than the A11 chip of the iPhone X. Battery life has gone up too, with the XS Max lasting around 90mins longer than the X from a full charge and 30mins more than the standard XS.

The new version of Apple’s operating system, iOS 12, isn’t massively different to the previous version, but improves on the overall performance. The iPhone XS Max is super-slick and responsive in use, but the X and 8 Plus are hardly sluggish, and both can also be updated to iOS 12.

The iOS remains simple, clear and full of useful features, such as the clever Face ID. It also gives you access to the best selection of apps and a vast library of content, including the biggest catalogue of HDR movies on the iTunes Store.

The iPhone XS Max’s larger screen brings with it an improvement in picture quality over the X. That extra 0.7in translates to an increase of 12 per cent extra screen area, but such is the increase in sheer cinematic quality, it feels like an even bigger jump. At this size, you’re simply more drawn in and engaged with the onscreen action.

Play a Full HD movie with standard dynamic range, such as Solo: A Star Wars Story, and the XS Max demonstrates a slightly cooler colour balance that looks a little closer to neutral than the iPhone X. This results in slightly purer whites, which are also a touch brighter and more detailed.

There’s a little more detail in the darkest parts of the picture, but the XS Max also looks just a little softer than the X, despite the identical pixel density. We play the movie IT in Dolby Vision, and the XS Max reveals a bit more of the gruesome detail in Pennywise’s lair. Its slightly better contrast also helps the gang’s flashlights penetrate the gloomy tunnels in brighter, punchier fashion.

Sharp, super-detailed, richly yet subtly coloured, and with excellent motion control. It’s a fabulous picture, and if you can handle the extra dimensions, well worth having in the bigger size.

Apple’s only advertised audio upgrade in relation to the iPhone XS and XS Max has been to the built-in speakers, which now boast ‘wider stereo sound’. That doesn’t do justice to the changes, though – the soundstage is wider, but it’s also much louder, cleaner, more dynamic and better balanced. The speakers at either end of the device combine to create a convincing and consistent stereo image.

The sound quality when listening via headphones has also improved. The general character is the same, but the XS Max is just a little clearer, more dynamic and punchier than the iPhone X’s already-accomplished sound.

The layered beats of SBTRKT’s Trials Of The Past are crisper and better organised, driving the track with more drama and urgency, while Sampha’s vocals are more nuanced and emotive. The Road by Nick Cave and Warren Ellis is delivered with greater dynamic subtlety and texture.

The XS and XS Max come without a bundled 3.5mm headphone adapter, so if you’re planning to use wired headphones (for the very best sound quality) you’ll need to budget an extra £9 to buy the adapter separately.

The iPhone XS Max sports twin 12MP sensors for the main camera with a telephoto lens supporting a wide-angle lens. The latter gets an increase in pixel size to 1.4um compared to the iPhone X, which allows it to draw in more light, resulting in better low-light photos.

To help improve all-round picture performance, the phone’s cameras also get a software boost in the shape of a new Smart HDR mode. It helps balance the brightest and darkest parts of high-contrast shots and is more intelligent than the X’s Auto HDR.

Selfie fans will appreciate the enhanced Portrait mode of the front-facing 7.2MP camera, and videographers will be able to capture even better 4K footage, thanks to a sensor that’s twice as fast.

It is no surprise that the 6.5in display of the iPhone XS Max is more engaging than that of the iPhone X, but what’s more surprising is the raft of improvements made to picture and sound quality. Collectively, these subtle changes result in a noticeably better AV performance, quite a feat when you consider the quality of the iPhone X.

But while those subtle improvements probably aren’t reason enough to upgrade from an iPhone X, the extra screen size might be. £1100 is a huge amount to spend on a phone, but the XS Max is good enough to justify it, particularly as it commands a premium of just £100 over the standard-sized XS.

If you want the big screen but don’t want to spend that much, there’s always the upcoming iPhone Xr, but don’t expect that lower-resolution LCD screen to have quite the same magic as the Xs Max’s beautiful, big OLED.