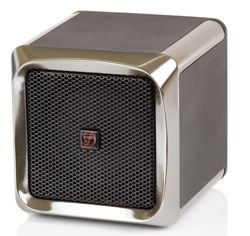 From the same family as the five-star SoundScience QSB, the new model adds Bluetooth wireless functionality in to the compact package.

Charge it up via USB and SoundScience claims each speaker will be good for 30 hours of continuous play at 75% volume, which sounds pretty good to us.

What's more, you should be able to get it up to full charge in just 60 minutes.

Once you're out and about with your speaker, you can get music from any Bluetooth source, such as a laptop or smartphone.

We got a sneak preview of the new speaker at the end of last year but the details, some of which have changed, have now been confirmed.

Sporting a very similar design to the QSBs, the new QB MITO speaker is a 9x9x9cm cube and delivers a solid 25 watts of power.

The QB MITO speaker comes with a "designer carry case" and all told weighs-in at just under 600g.

Due out in May – though the original speakers took their time – the QB MITO speaker by SoundScience will sell for £60 and be available from Dixons Online, Dixons Travel and AMP3.