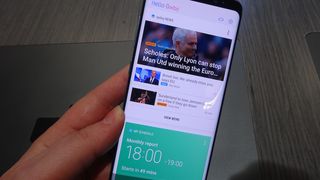 Bixby could certainly do with a bit of help. While it was promised to arrive on the Galaxy S8 smartphone, it still hasn't landed in the UK nearly three months after the handset launched.

Samsung is also rumoured to be making a smart speaker that uses Bixby to recognise your queries and commands. It's thought to be similar to Google Home or Amazon Echo. Development is rumoured to be slow due to problems with Bixby itself.

Innoetics' speciality is text-to-speech, using natural-sounding digital voices, but it also develops voices for artificial intelligence applications and for digital characters for talking books. Its tech is used in 29 different synthetic voices which can speak 15 different languages. So it should be able to handle your request for a pizza.

Samsung has confirmed the acquisition, but won't be drawn on what it could mean for Bixby. All it would say - in a statement to TechCrunch - was that Innoetics' technologies "present an opportunity to strengthen Samsung's capabilities". Innoetics' co-founder Emilios Halamandaris told a local paper in the firm's native Greece that it will end its current services and "focus on further developing the technology it has planned and developed so far."

Bixby is expected to be present on the Samsung Galaxy Note 8, which should launch at the end of August. If Samsung has it ready in time, that is...