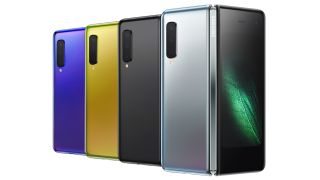 There’s an undeniable schadenfreude when big claims in the world of tech fall flat on their faces. That could be what’s happening to the Samsung Galaxy Fold smartphone right now...

Early adopters might now be thinking twice about their high-end pre-purchase orders as the first flush of review units sent out to journalists look a little worse for hardly any wear at all.

The Verge was one of the first to publicise its woes with a screen breakage caused either by some debris getting trapped under the OLED or the hinge itself buckling and busting through. Either way, the phone is totalled and winging its way back to Samsung HQ for a full analysis.

SUPER YIKES: something happened to my Galaxy Fold screen and caused a bulge. I don’t know how it happened, and I’m waiting to hear back from Samsung. It’s broken. https://t.co/p1014uB01D pic.twitter.com/3FZJkWtSKrApril 17, 2019

The screen on my Galaxy Fold review unit is completely broken and unusable just two days in. Hard to know if this is widespread or not. pic.twitter.com/G0OHj3DQHwApril 17, 2019

Other reviewers have caused problems by peeling off the screen’s top polymer layer, which is actually an integral part of the display’s structure and not simply the kind of protection film one often finds on new devices.

And then there’s Steve Kovach from Bloomberg, whose unit is just plain on the fritz with one side of the panel flickering like a backstreet neon sign.

Samsung’s response has been to call in the old units, send out some better ones and try to fix any problems going forward. But, as often with these very high profile muck-ups, the damage may already have been done.

By the looks of things, the Fold is the classic story of a product that simply isn’t ready and, in its rush to beat Huawei, Xiaomi and every other company making gains on the company’s smartphone fiefdom, Samsung will have to pay the price.

It brings us no pleasure to witness the beginning of what’s going to be a saga that goes on and on. (Need we remind ourselves of the incendiary Samsung Galaxy Note debacle of 2016?) We wish the company all the best with its brave leap into the world of flexible OLEDs. We really do. It’s more that we appreciate the timely check on the eruption of premium smartphones prices. Lest we forget, the Fold is set at nearly $2000.

Hopefully, it’s not more than a quick fix, but such an array of problems from so few review units points to something more involved.

Either way, this may not spell the end for the foldable phones of the near future. Ever heard of Royole?