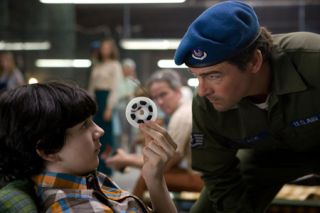 Disc of the month

Given Hollywood’s current enthusiasm for low-risk productions, it should be no surprise that so many recent films are either remakes, sequels or, at best, thinly veiled attempts to kick-start the latest toy franchise.

'Confess, kid – you're supposed to look like an adolescent Spielberg, right?'

Super 8 is rather different, but no less of A Sure Thing, thanks in no small measure to the reassuring familiarity of its premise. Set in a sleepy Ohio town in 1979, it’s both an endearing tale of teenage rites of passage and a blockbuster sci-fi.

As such it’s instantly recognisable as a paean to Spielberg classics such as Close Encounters, The Goonies (written, but not directed by the man himself) and, of course, E.T..

The result is a film that may seem derivative, but which is also one you instinctively want to like: it just feels, looks and seems ‘right’ straight from the outset.

It’s not merely the film’s familiarity that helps propel its success; it’s also the quality of its principle protagonists. Star Trek director J.J.Abrams both wrote the script and directed the action, while Spielberg himself held down production duties – as ringing an endorsement of Abrams’ intentions as you can imagine. Its child actors deliver some stunning performances, too, most notably Elle Fanning, who excels as the film’s primary love-interest.

But more than its creative accomplishments – and we can’t reveal too much more about the film’s premise for fear of giving the game away – Super 8 earns its place in our affections because it’s so phenomenally polished.

In Blu-ray form, it represents film-making of the very highest calibre, its slick, technically accomplished production values, beautifully composed cinematography and sensational picture transfer combining to create a viewing experience to luxuriate in.

And then… and then, there’s the way it sounds. And Super 8 sounds simply stupendous, utterly extraordinary, world-class: indeed, it may well be the best Blu-ray soundtrack we’ve ever heard.

That’s some statement, but then this disc’s Dolby TrueHD 7.1 soundtrack is some achievement. It exemplifies every core facet of quality sound design, from the expertly crafted subtleties and wonderfully precise steering of its off-camera ambient effects, to the gut-shaking, sofa-shuddering and utterly visceral thrills of its most dynamic sequences.

One glance at the film’s cast and crew list on imdb.com helps to explain why. Super 8’s soundtrack includes contributions from David Acord, Ben Burtt, Gary Rydstrom and Matthew Wood, some of Skywalker Sound’s most acclaimed and successful sound editors and designers.

It’s no wonder it sounds so wonderful – and so it should be no surprise that Super 8 has become an instant testing favourite around these parts. It’s a great film, and an utterly essential Blu-ray buy.

While the predictability of this rake around a dead woman’s effects is a gift to the cynical, there’s undeniable merit to plenty of the 12 songs (or rather, in the case of half of them, sketches of songs) here.

‘Hidden Treasures’ is overstating the case somewhat, but as a not-strictly-necessary reminder of what an effortlessly evocative singer and arch, economical lyricist Amy WInehouse could be, Lioness gets the job done – even if it confirms only what everyone already knew.

There are too many glib ‘standards’ here (although Will You Still Love Me Tomorrow? may be one of her very best vocal performances) and not enough Mark Ronson productions, but there’s little overt filler.

The sound runs towards the warm, analogue-y soul palette that was so much a part of Back To Black’s charm; your set-up will need to stage, focus and time with efficiency.

Texture and timbre is all-important, and it goes without saying that if your system can’t deliver the midrange with all the detail and subtlety intact then there’s no point in buying Lioness: Hidden Treasures in the first place.

Few hip-hop acts have anything like The Roots’ longevity, and very few can match their fierce intellect or determination.

Undun, the tenth album in a 19-year career, is undoubtedly The Roots’ most sombre – but it’s probably their most unified, and among their most inventive (few are the notionally hip-hop acts who would dare (or even think) to close an album with a concise four-part orchestral suite that’s built on a Sufjan Stevens piece).

The album is a life-story told in reverse, a study of fate and free will in the most grindingly mundane of circumstances.

As a concept, it’s painstakingly crafted and generally well realised, while musically the beats are deep, the rapping crisp and the sound is beautifully even.

Your system will need exemplary low-end control and solidity, space and variation in the midrange, and total authority over treble frequencies if Undun isn’t going to sound dense and unduly aggressive. But in the right hands this is a warm and forceful recording. It’s also as thoughtful and ambitious a set of songs as we’ve heard in a good while.

Standard meal or Go Large? It was the same problem every time...

Nicolas Winding Refn’s artfully stylish thriller evokes the late ’60s with its script and cinematography. The tale of a stuntman turned getaway driver, it’s not the rip-roaring test disc you’d expect, but it’s entertaining all the same.

'Im sure I had the budget for The Queen II in my bag when I left the house...'

Sporting a solid cast – Sam Worthington, Helen Mirren, Tom Wilkinson and Ciaran Hinds – and a meaty premise, this thriller is almost derailed by its lumpen finale. But for the most part, this is intelligent, classy and well-crafted

Pedro Almodovar is not renowned for slasher flicks, but this creepy, unsettling and at times plain gruesome horror movie is every bit as macabre as anything David Cronenberg could conjure. Bold surround mixing heightens the tension

Another Monday morning, and the M25 was going nowhere fast...

Much too short, with variable game-play and a fatuous plotline, Need For Speed: The Run is partially redeemed by the way the Frostbite 2 engine makes it look. Lustrous, beautifully lit and sumptuously textured, it’s a treat for your TV if nothing else.

Epic’s landmark iOS game has have a sequel, and it’s bigger, bolder and much more beautiful, especially on an iPad 2. Graphically gorgeous portable games are no longer rare, though, and some of the hack-and-slash slog has lost its novelty.

'It's going to be -5C tonight: you'll catch yer death dressed like that...'

GTA III’s 10 years old; to mark the occasion it’s now available on tablet and smartphone for £2.99. It’s the game you know and love, but with prettier graphics and surprisingly effective touchscreen controls. And that means it’s brilliant.

As well as all that, this month we've mainly been listening to, watching and playing with...

1. Spotify has added apps. Head to Previews on the Spotify site to try it. We Are Hunted’s app is ace.

2. Gem Club do a fine line in breathy melancholia. Debut Breakers is short and sweet, if not too cheery

4 Emeli Sande made quite an entrance this year. Her acoustic tracks make us tingle every time

We update our Spotify playlist every month: click here to listen. Send playlist suggestions to whfedsteam@haymarket.com