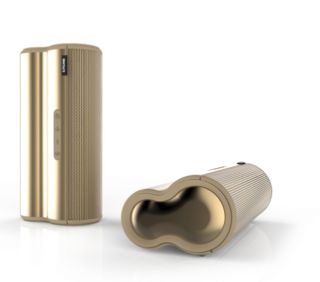 Blufiniti is the first model in the quartet of new speakers, featuring Bluetooth wireless streaming, NFC and a rechargeable battery that promises to deliver 8-10 hours of playback time.

It houses two mid-high range drivers, which Otone says deliver "room-filling sound". The Blufiniti is available from this month in six colour options - black, white, red, yellow, blue and green - at a cost of £60.

Second on the list is the Blufiniti+ (above), which sports a anodised gold aluminium casing. It, like the Blufiniti, features Bluetooth and NFC, but also adds an auxiliary input and IPX5 waterproofing.

A rechargeable battery and larger speaker drivers for a "louder, bassier sound" round things off with the Blufiniti+, which is due to hit the shelves in early 2015.

The third of the new wireless speakers comes in the form of the BluWall (above), which includes two 5W RMS drivers and a rechargeable battery that promises 8-10 hours of playback.

In keeping with Otone's new colour scheme, the BluWall is also available in the six colour options of black, white, red, yellow, blue and green and can be pre-ordered now for £70.

And completing the four-strong line up of wireless speakers is the BluWall+, which is larger than the BluWall and - as a result - features twin 8W high-midrange drivers, as well as a 10W subwoofer.

Bluetooth, NFC and auxiliary inputs all make an appearance with the BluWall+, again available in the same six colour as its counterparts and now on pre-order for £90.

MORE: Read all our Otone reviews and news

And in addition to the portable speakers, the BluMotion radio (above) comes with DAB+, DAB and FM tuners and a high-resolution white on black LCD display to show what's playing.

It also comes with dual alarms, a sleep timer, leather carry handle a rechargeable battery for 8-10 hours or playback time. With six colour options, it can be pre-ordered now for £80.

"With such a complete range of Bluetooth speakers and now a DAB radio, Otone is now able to fulfil almost any audio customer’s need.”