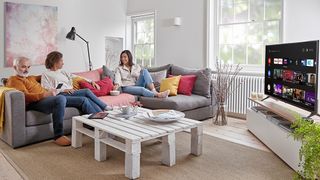 Freeview Play is now available on many Android TVs made by Philips, Sharp and TCL. The deal between Google and Freeview Play platform operators Digital UK was announced a couple of weeks ago, but now we know which TV models will get the update.

Freeview Play brings 85 live channels (with 15 of those in HD) and 20,000 hours of on-demand content from the likes of BBC iPlayer ITV Hub, All 4, My5, UKTV Play, CBS Catchup Channels UK and Horror Bites.

It launched in 2015 and now has over seven million users. It claims to be the UK's fastest-growing TV platform.

All of Philips' and Sharp's new Android TV models (including Sharp's BN series and Philips' 805) will ship with Freeview Play built in. Last year's models (such as Sharp's BL series and Philips' OLED804) will be able to access it following an over-the-air software update. TCL has also chipped in – its EC788 and EP658 Android TV models will get the update on 31st March, followed by the brand's QLED Android sets that are launching in May.

This update is a big deal for these models, as we've regularly complained that Philips TVs in particular have lacked some of the core catch-up apps that many people consider an essential part of any smart TV platform.

For what it's worth, Sony has typically worked around the issue by integrating YouView into its own Android TVs.

Freeview Play rounds out catch-up TV offering with My5 addition