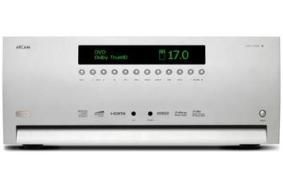 At the same time, Arcam says it is developing a 3D upgrade for its forthcoming BDP100 Blu-ray player: that upgrade will be available in the second quarter of 2011, with the player itself going on sale mid-October.

Charlie Brennan, Arcam's managing director, says: "We have spoken to many customers who are confused about the benefits of 3D and so far the consensus has been to adopt a wait and see approach.

"The hassle and expense of 3D glasses is seen as a major hurdle. Many people report an initial positive response followed by an uncomfortable feeling of fatigue. The jury is out as to its long-term success.

"But it obvious to us that 3D is not going to go away anytime soon, so we are designing and building a new video board that can offer a bypass option for use with high-definition 3D signals.

We expect to have this HDM1 1.4a compliant upgrade available in quarter one 2011. It will be a dealer-fit option."

Brennan adds: "We are also soon to launch our first Blu-ray player after a series of long delays [it was originally due on sale in August, but is now expected in mid-October] and the question of 3D playback is also being raised.

"As ever a lot depends on the availability of next-generation silicon, but we intend to engineer a hardware upgrade solution for people who want to convert their systems to 3D in the future for later in 2011."