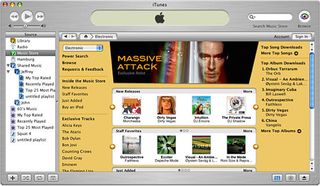 Want a little What Hi-Fi? history lesson? Well, here's one:

On April 3rd 2008, Apple announced its iTunes store had overtaken the Wal-Mart chain to become the number one music retailer in North America.

The iTunes store had by that time sold over four billion songs to its 50 million customers, and featured the world’s largest music catalogue of over six million songs (image above via subtraction.com).

Technology and consumer preferences have evolved since then, of course. Many people now choose to stream via Spotify, Tidal, Amazon Music, or Apple's own Music service rather than own it - at the end of last year, vinyl sales outstripped downloads for the first time. The challenge has been getting better quality audio over the airwaves, which Spotify is working towards and Tidal has aimed to do with its MQA-encoded service.

iTunes itself has gone through a fair few changes, with the failed introduction of the social network Ping in 2010 and the iTunes Match feature in 2011 that better linked your music with the Cloud.

And the software, which is now on version 12.6, is still being updated - most recently with the new 'rent once, watch anywhere' feature that lets you rent on one device and watch on another.

However, not everything is so rosy for iTunes. The software has been occasionally criticised for being bloated, complex and sluggish, with some users feeling the service would be improved if Apple segregated its video, music, and app services as it does on its iPhone.

Plus, with more competition from other smartphones like Samsung's new Galaxy S8, it'll be interesting to see how Apple can stay fresh and innovative for another nine years after achieving what some may suggest is its peak.

But the next iPhone is just around the corner, and who knows what's to come?