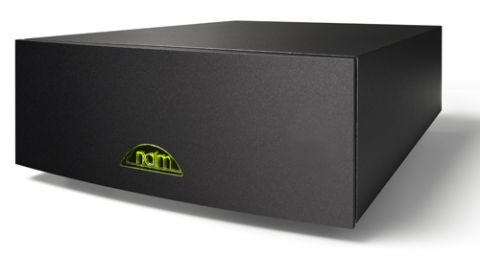 Designed to partner the DAC-V1 DAC/preamp, the NAP 100 has much to offer anyone wanting a fine power amp in compact form

We’ve tested the Naim NAP 100 a couple of times, partnering the company’s DAC-V1 DAC/preamp, but we’ve never quite got round to giving this neat little power amplifier its own review.

That’s an oversight we’re happy to put right: drawing on the company’s classic discrete transistor amplifier design, derived in this case from the Naim SuperUniti all-in-one system, and with a dual mono layout in compact ‘shoe box’ casework, the NAP 100 has an appeal far beyond simply using it with the DAC-V1 as part of a desktop audio system.

In fact, we’d say this power amp, delivering 50W per channel into 8 ohms, and 75W into a 4ohm load, could well appeal to anyone wanting a gutsy amp able to drive a wide range of speakers, fill most rooms with sound, and yet take up minimal space on the equipment rack. It could even be hidden away, should you want to create a really minimalist-looking system.

The NAP 100 may only be a little less than 21cm wide and stand just under 9cm tall, but inside and out it’s all-Naim: it’s built in the company’s factory in Salisbury, uses selected components throughout, including discrete bi-polar transistors throughout the circuit.

The most critical resistors and capacitors are hand-soldered above the surface of the main circuitboard to avoid them being affected by noise from the output devices, and are selected and matched before installation.

The linear power supply uses a large toroidal transformer with separate windings for each channel, and even the torque of the fixings for the output devices is set precisely, Naim’s engineers saying this has a considerable effect on sound quality.

The amp is clothed in the usual non-magnet low-resonance chassis and sleeve, powder-coated in black, and connections are as simple as you’d expect of a power amp, though the NAP 100 is again very ‘Naim’ in offering a choice of RCA phono or locking DIN inputs from your preamplifier, and having speaker outputs on four 4mm sockets. Naim’s usual two-pin speaker plugs are provided for these sockets, but you can also use normal ‘banana’ plugs.

Actually, those connections aren’t quite as simple as you might expect: the DIN input floats, ensuring the cable from the preamp doesn’t transmit any microphonic disturbance to the main circuitboard, and while the RCA phono inputs are fixed, their connection to the main board is designed with stress-relief points, allowing the board to flex, also keeping potential interference at bay. Even the speaker output board is mechanically isolated from the main circuitry.

And that’s about it(!): the power switch is on the rear, the amp being designed to be left on, and the Naim logo on the front lights up to show the amp is good to go.

As you might expect, given that the NAP 100 is of a similar power to the company’s ‘conventional’ entry-level power amp (the £1195 NAP 155 XS), this little amp is capable of hard-hitting, yet refined presentation of a wide range of music. Far from being purely best-suited to use with sensitive speakers for close-up listening, it’s more than able to drive even quite demanding designs to serious levels without any sign of loss of composure, and proves a whole of fun into the bargain.

Whether used with the DAC-V1, where it redefines expectations by delivering a very high level of musical involvement, or run off alternative preamplification – we tried it with a couple of preamps, connected to the preouts of a SuperNait and even on the end of the front channel preouts of an AV receiver – the NAP 100 is never anything less than an entirely convincing means of driving speakers.

It has all the grip and control needed to take speakers by the scruff of their voice-coils and make them do what it wants, as relevant when playing an intricate chamber ensemble or jazz piece as when slamming out everything from Daft Punk’s current album to the superbly live retro feel of The Dodge Brothers’ Memphis-recordedThe Sun Set.

Of course, what’s upstream of the power amp will have a major effect on the sound here, but the ability of the NAP 100 to deliver the snap and extension of upright bass, while at the same time making clear the reverberation of the famous Memphis studio, shows just how well it’s keeping those drivers under control. Notes can be heard to start and stop crisply, the rhythms drive hard, but all the while there’s that sense of the space around the performers, and the good time they’re having making the music.

Similarly the Naim presents all the emotion and sheer enjoyment of the new Rod Stewart solo set, Time, whether crunching out the opener, She Makes Me Happy, or revealing the tonality of the singer’s voice – slightly thicker these days – and the surrounding musicians on the title track.

Play full-on orchestral music – and you don't get much more full-on than the Duisburg Philharmonic’s 24-bit/192kHz recording of Friedmann Dressler’s Symphonic Ring arrangements of Wagner on Acousence Classics – and all the abilities of this little powerhouse are on show from the off.

The barely audible opening of the Rhinegold prelude gives way to those very Wagnerian full orchestra slams, with brass ripe and prominent, while the rhythms of the percussion as Siegfried forges the sword Nothung zing out of the speakers with real energy.

On any level, this compact amplifier has bags of appeal, and it’s only a pity its arrival has been – perhaps understandably – overshadowed by that of the DAC-V1.

If you’re in the market for a power amplifier, but don’t fancy some hulking device filling a load of rack-space as comprehensively as it heats the room, the Naim NAP 100 should definitely be on the must-listen list.

That the price makes it something of a bargain just about seals the deal.