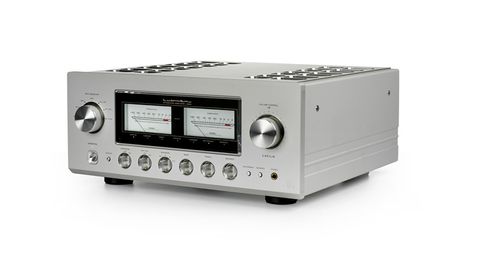 If you’re looking for a one-stop amplification solution for a high-end stereo system, this Luxman is an excellent place to start

Within hi-fi circles, the conventional wisdom of an inverse relationship between amount of features and quality of performance prevails.

It’s a point of view that came into prominence back in the 1970s and, in our experience, still holds true today. But for every rule there’s usually an exception - in this case it’s the Luxman L-509X.

This is a fully loaded analogue amplifier. Anyone who thinks such a unit should also include digital inputs should know such modules are rarely great, even when fitted to high-end products – they are generally outperformed by outboard digital-to-analogue converters such as Chord’s sub-£400 Mojo. At this price, such a level of performance is just not good enough.

The inclusion of digital modules also tends to make the analogue side of things sound worse, which in our view is a compromise too far.

The L-509X packs a moving magnet/moving coil phono stage, headphone output, tone controls and switchable speaker outputs – all things in demand back when its decidedly retro appearance was the latest fashion.

There’s no shortage of connectivity. Alongside the phono stage, this Luxman also has four single-ended RCA line-level ins and two balanced XLR options. We can’t think of a typical stereo set-up in which this integrated might get caught short.

The company has kept this amplifier as flexible as possible - so, although it’s an integrated amp, it’s possible to split the pre- and power sections (at the press of a button) and use them separately.

You can connect two sets of speakers and switch between them, or use them together.

Take a look inside and it’s hard not to be impressed by the standard of construction.

Everything looks neat and carefully planned. We’re pleased with the quality of the components used, right down to the material from which the circuit board is made. It’s clear Luxman hasn’t skimped.

The internal view is dominated by the power supply arrangement. There’s a chunky mains transformer (600VA) and dedicated banks of smoothing capacitors (40,000 micro Farads) for each power amp channel.

The power amp circuitry is a Class A/B design capable of 120W per channel and, even more impressively, able to double output as impedance halves. On paper at least, this is an amplifier that will have no trouble driving difficult speakers to high volume levels.

The preamp side of things hasn’t been ignored either, with Luxman developing its own 88-step volume control system and using the basic circuit from its top-end preamp.

The message is clear: this may be an integrated amplifier, but it really is more like a separate pre- and power amplifier in a single box rather than a compromised electrical design.

General build quality is excellent. The L-509X feels immensely solid and weighs in at almost 30kg. Fit and finish is terrific, and good enough for amplifiers costing considerably more.

We love the feel of the controls - they’re nicely damped and pleasingly precise in use.

Even the remote handset is nice to hold and use, even if its button layout is a little odd. Handsets tend to be a blind-spot for most high-end manufacturers, but overall there is much to like here.

This Luxman may be an expensive amplifier but we feel, physically at least, it’s well worth the money - and then some.

That view doesn’t change once we start listening. The L-509X is an amplifier that creeps up on, rather than wows, the listener when the music starts.

It has an understated presentation it takes a while to appreciate. Those looking for sonic fireworks will find them here only if they’re in the recording. This amplifier doesn’t spice things up for entertainment’s sake.

Tonally, the Luxman is as neutral and balanced as they come – provided you leave the tone controls alone. It sounds a touch cleaner and crisper with the Line Straight button pressed – doing so bypasses the tone and balance controls, and gives a purer signal path.

We also switch off the backlighting on the power meters. We do this not just to avoid distraction but for the slight increase in transparency it offers. These are tiny gains in the whole scheme of things, but in the context of an amplifier with such talent we think they’re justifiable.

Equally, such an amplifier deserves a top-class source and speakers.

We use our usual Naim NDS/555 PS streamer for the line level inputs, together with Clearaudio’s Innovation Wood record player (including the Stradivari V2 moving coil cartridge) to test the phono stage. As for speakers, our reference ATC SCM 50s are pressed into service, along with KEF’s Reference 1 standmounters.

We throw the L-509X in at the deep end with Orff’s Carmina Burana and it swims confidently. This is an impressively detailed and insightful performer, one that’s capable of class-leading clarity.

It recovers subtleties, even in a production as dense as this, and keeps them audible as the piece becomes demanding. The low-level reverb defines the acoustic space the concert was recorded in, and spatial clues help us identify the exact positions of the orchestra and choir upon the sound stage.

The music’s wild dynamic swings are delivered with enthusiasm, the amplifier’s generous power output obvious in the punch and solidity of the presentation.

There’s no shortage of drama in the sound ,yet we become aware of the L-509X’s impressive composure and the sense of control it imparts. There’s an ease of delivery here that shrugs at high volume levels and the readings on the power meters.

We become a little concerned all that control and composure might take the edge off more upbeat music, so play a number of tunes from the likes of alt-J, Macklemore & Lewis, Bruce Springsteen and Chic.

We’re pleased to report it's not the case. Feed the Luxman a hard-charging track with a complex rhythm and the L-509X renders the music with a hand-on approach that keeps all the energy and rhythmic organisation intact.

We’re particularly impressed with the way this amplifier can deliver deep bass with such texture, agility and power.

The story remains positive when we try the phono stage. The amplifier loses none of its even-handed nature with this input, delivering a good dose of insight and entertainment.

There’s just a mild drop in transparency compared to the line stages, and a slight loss of the low-level finesse. Still, the phono module has more than enough gain to work with most cartridges, and stays commendably quiet when it comes to background hiss and hum.

We’re less taken with the headphone output. The tonal character of this output is consistent with that we hear through speakers, but using a range of headphones from Grado’s RS-1s and PS500s, as well as the Beyerdynamics’s T1s, we feel the sound is less lively and expressive than we’d like.

If you’re an occasional headphones user, the circuit in the Luxman is fine. However, if you’ve got high-end headphones and want to hear them at their best, a good dedicated outboard amp will do the job better.

Overall, though, we’re deeply impressed by the L-509X.

On the surface it might present like an expensive retro throwback, but it’s so much more than that. It has a blend of build, features and performance that’s hard to better at anywhere near this price.

If you’re lucky enough to have this kind of budget and are looking for a neat package without sacrificing performance, this Luxman demands your attention.

See all our Luxman reviews