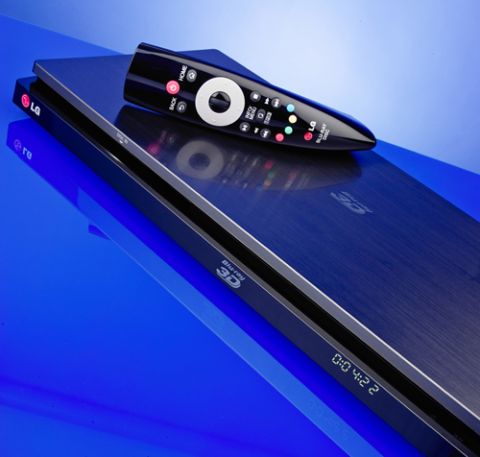 Packed with features, but picture and sound quality just don’t hit the mark

With no shortage of budget Blu-ray players on the market, differentiating one manufacturer’s player from another on paper is becoming increasingly tough. As a result, extra functionality and features are playing an ever-increasing role.

Take the LG BP730. This Blu-ray player has a couple of tricks up its sleeve, but is it all smoke and mirrors at the expense of picture and sound quality?

LG has done a good job with the BP730’s clean, elegant appearance. The brushed-effect top panel and slot-loader add a dash of style, as does the arrangement of touch-sensitive buttons on the narrow ledge running long the front of the machine. The 730’s a relatively wide machine but slender with it.

Connectivity options are what you’d expect from a budget Blu-ray player. A single HDMI output, optical digital output and Ethernet socket are all on the rear, while a USB input on the front will accept media files from flash storage devices or larger external hard drives.

The player can upscale to Ultra HD (4K) resolution, but this feature only works when partnered with a 4K display, such as the 84in LG 84LM960V and the new, and slightly more affordable, 65in Sony 65X9005A 4K TV.

With the Blu-ray of The Amazing Spiderman, the LG picks out a fine level of detail on Peter Parker’s Spidey-suit. Skin tones on the lead characters look realistic as do clothing textures.

Switch to Toy Story in 3D and while colours could do with a little more punch and vibrancy compared to the best Blu-ray players, the film’s effects are still entertaining.

Switch to a lower-resolution source, such as the DVD of Mission Impossible: Ghost Protocol and chinks in the LG’s armour become much more apparent. The picture lacks clarity and resolution. There’s a real subdued appearance, too: blacks aren’t especially deep nor are contrast levels particularly high.

We have a quick blast of some on-demand content and The Apprentice viewed through BBC iPlayer is watchable without ever really excelling – traces of noise make there presence felt more strongly on the LG than on rival players.

In terms of sound quality, the LG BP730 opts for a weighty, rounded character, which lends itself well to the thundering, explosive soundtrack of the fun, but fatally flawed A Good Day To Die Hard.

As the CIA safehouse is stormed by the bad guys, explosions and heavy machine gun fire sound meaty and substantial – you don’t get a sense of any hardness in the treble as bullet casings cascade onto the floor.

Things aren’t so good when you listen to music, be it off a CD or streamed via a connected device – it’s a much messier sound. Vocals and high notes sound especially confused and quite unpleasant. The LG loses its grip on a track all too easily.

One of the LG BP730’s ‘tricks’ is a Magic Remote control, similar to that offered with some of the LG smart TVs. The wand is curved and designed to be held like phaser gun from the old Star Trek TV series. Wave it around and an on-screen cursor mimics your movements, allowing you to navigate through the LG player’s menus.

Alternatively, you can use the remote’s d-pad and integrated scroll wheel to cycle through menus – press it in to select. The Magic Remote takes a little time to get used to, but the remote sits snugly in hand and the combination of waving and clicking works surprisingly well.

The LG has conventional wi-fi, and also boasts wi-fi Direct, allowing you to beam content from compatible devices, without the need for a home network. DLNA certification means those wanting to stream content from a PC and the like, can.

Another feature that impresses is the BP730 Private Sound Mode. If you find yourself watching movies late at night and don’t want to disturb others, you can use the LG Blu-ray player combined with its remote app and wi-fi connection to beam movie sound to your smartphone or tablet.

We tried it a couple of times with our resident iPhone 5 and had great success – there were no lip-sync issues, and coupled with a decent pair of headphones, it made for a good system.

The slight drawback is that it only works when you’re watching a DVD or Blu-ray disc. You can’t use it when watching streamed content, which is a shame.

Smart functionality is par for the course on Blu-ray decks these days, and the LG is no different.

The BP730’s home screen is split into different sections, one of which hosts all your key catch-up and video-on-demand (VOD) apps, such as BBC iPlayer, Netflix, Lovefilm and Acetrax. There’s no shortage of movie providers to choose from, although there are a few notable absentees such as ITV player, 4OD and Demand 5.

The LG BP730 Blu-ray player is an attractive package, both in terms of style and functionality. But inconsistencies in picture and sound quality hold it back.