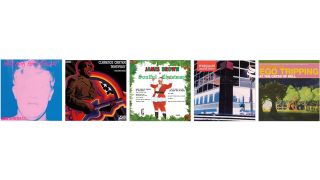 Christmas songs, generally, are the worst thing about both Christmas and songs.

They are the waste paper basket at the office party, where bailiff letters swill with regurgitated eggnog, and around it we all sing maudlin verse to hide our despair.

But all is not lost. Because, though vastly outnumbered, there are some fine songs to celebrate this time of year.

As our gift to you, we have put together a dozen of them – one for each of the 12 days of Christmas – to test whatever hi-fi kit you unwrap on the big day. If only we could promise you never had to hear Mariah Carey again …

Listen to our alternative Christmas playlist on Apple Music, Spotify and Tidal.

(P.S. One of our selections isn't on Tidal, so we've thrown in a bonus track to make up for it.)

“There was one in the gang who had Scalextric/And because of that he thought he was better than you”. Oh, the ignominy of your friends having the toys your parents couldn’t get for you. Here, Half Man Half Biscuit remind us the true meaning of Christmas is not in the belongings you have, but in the destroying of other people’s belongings when they’re acting like a …

Buy Back In The D.H.S.S./The Trumpton Riots E.P. by Half Man Half Biscuit from Amazon

Ding Dong Bell by The Ethiopians

So many reggae and ska tunes we could have picked – Toots and The Maytals’s Happy Christmas; Lee “Scratch” Perry’s Merry Christmas, Happy New Year; Granville Williams’s Santa Claus Is Ska-ing To Town. We go for The Ethiopians, though, not least for Ding Dong Bell’s production being so endearingly portly and full of fireside warmth.

Christmas Card From A Hooker In Minneapolis by Tom Waits

Barroom piano, Tom Waits’s unmistakably guttural tone and a bittersweet tale of a prostitute writing to an acquaintance of pregnancy and incarceration: Christmas Card From A Hooker In Minneapolis is about as festive as they come.

Staggeringly, James Brown released three whole Christmas albums. This is the title track from his second, which opens with the equally brilliant Santa Claus Go Straight To The Ghetto, with the Godfather of Soul offering choice opportunity to dance off those roast potatoes and stuffing.

Buy A Soulful Christmas by James Brown from Amazon

Long Way Around The Sea by Low

Low released their eight-track Christmas album – cannily titled Christmas – in 1999, and included re-workings of Little Drummer Boy, Blue Christmas and Silent Night. The standout track for us, though, is Long Way Around The Sea: a sullen telling of bringing gifts to the newborn Christ, and the acceptance of God over the word of Herod.

Buy Christmas by Low from Amazon

Ryuichi Sakamoto actually starred alongside David Bowie and Tom Conti in Nagisa Oshima’s wartime drama Merry Christmas Mr Lawrence, and picked up a BAFTA for his score for the film. This piece, which became the film’s theme music, has been covered and sampled numerous times in the years since, but has never been so affecting as its original.

This isn’t so much a celebration of Christmas, as much as a wish that the compassion and sympathy to which we feel compelled at this time of year was the rule rather than its exception. Far from a groundbreaking idea, but one that sadly doesn’t feel out of date.

The Yule Cat, or Jólakötturinn, is a monster in Icelandic folklore that devours those without new clothes to wear before Christmas – a sign you had not helped with the Autumn’s wool work. The lyrics for Jólakötturinn come from Jóhannes úr Kötlum’s poem of the same name, and prove that Iceland even has better monsters than we do.

From one Christmas villain to another, Mogwai’s Like Herod only truly references its subject in the title, given its instrumental nature, but does perhaps somewhat inadvertently capture the violence he sought to wreak. Try sleeping through this one, Granddad.

Khruangbin’s cover of this Vince Guaraldi Trio classic is a typically laid back groove from the Texan three piece. We like this bass-heavy version, B-side to the main version released on 7-inch vinyl this winter.

Buy Christmas Time Is Here by Khruangbin from Amazon

Back Door Santa by Clarence Carter

Clarence Carter is the Santa Claus your mommy probably wanted to kiss. A track laced with wry wit and suggestive beyond doubt, the Back Door Santa brings his gift to young ladies all year round – and strutting like this we can imagine why he’d be on their list.

It's Christmas So We'll Stop by Frightened Rabbit

The world lost one of its finest, most articulate and sardonically humourous songwriters in Scott Hutchison earlier this year, and It’s Christmas So We’ll Stop is as apt a way as any to celebrate his life as 2018 comes to a close. A call to arms to end our bickering at least for the day, and perhaps even extend the amnesty to New Year, this decade-old track has become no less handsome with age.