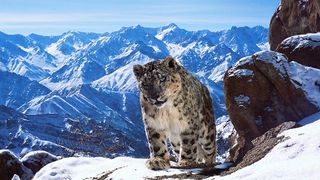 A documentary can be many things: educational, thought-provoking, enlightening on the human condition, even scary. But, above all those things, if it's not entertaining, it's not worth investing your time in.

Here, then, we bring you a selection of the What Hi-Fi? team's favourites from Netflix, so you won't be wasting your time in sorting through some of the lesser efforts out there.

There are fascinating films on nature, history, sport, politics and, of course, tigers in this list. Something, indeed, for everyone.

John Coltrane's music moved people – and continues to move – in a way few musicians have managed in history. A saxophonist and composer, he revolutionised jazz music and had a huge influence on the wider music world and indeed popular culture. After all, how many other artists have inspired churches to worship them as a God?

The impressive roster of talking heads on Chasing Trane tells its own story and the powerful testimonies from Carlos Santana, Common, Bill Clinton and The Doors' John Densmore, not to mention from fellow jazz luminaries, reveals the sky-high esteem in which Coltrane's music, and musicianship, was held.

While the documentary follows a conventional template for such an unconventional musician, the insight from friends and family, not to mention the music, needs little by way of extra fanfare. An excellent watch for casual and hardcore fans alike.

The remarkable and really rather scary story of the Russian doping scandal. Filmmaker Bryan Fogel found that he had stumbled upon a far bigger story when he started to research a documentary into doping (and evading the anti-doping testers) in amateur cycling.

His investigations led him to Russian Grigory Rodchenkov, whom Fogel befriended over time, and who, it eventually emerged, was in charge of an enormous state-backed anti-anti-doping program for Russian athletes from a number of sports.

Rodchenkov, fearing for his life, is now on a witness protection program in the United States – and Fogel got the inside knowledge into one of the biggest scandals in sports of all time. On the back of this information, of course, Russia has been banned from the Olympic Games, World Athletics and more – and is still to be allowed back into the fold.

You can’t beat a David Attenborough nature doc when you’re in lockdown – and Netflix has a number of them. Obviously, they’re all superb, but we’ve plumped here for Planet Earth II with its six sublime episodes each concentrating on a different environment – from the opening Islands to the closing Cities.

Shot and available in 4K (assuming you can get that over Netflix at the moment) this series takes advantage of all the very latest in wildlife photography techniques to get images that would have been unimaginable a decade or so ago. Truly unmissable.

Sunderland 'Til I Die

Two seasons of behind-the-scenes football-club underdog failing to turn good docudrama? Don’t mind if we do. (Especially as one of the What Hi-Fi? fold is a die-hard Newcastle United fan...)

A compelling insight into the pitfalls of the football business if you happen not to be one of the top six or seven clubs, this series follows a Sunderland team, newly relegated from the top division, in what was intended to be a triumphant return to the Premier League.

Who could have guessed that, in fact, our hapless heroes would end up going the other way, and into third-tier ignominy? Well, pretty much no one – which only adds to the drama.

It’s a very human story of course, with back-room staff, fans and players all affected hugely, and the viewer feels for them.

The 13th amendment to the United States’ Constitution abolished slavery – but left a loophole as far as involuntary servitude goes, by allowing it for those incarcerated for crime. And so, for those unfortunates sent to prison for many years for astonishingly minor misdemeanours, slavery remained a very real way of life.

This documentary, by Ava DuVernay, examines the link between a prison system that was used to take advantage of the loophole immediately after the amendment was passed, and big business and race inequality in the States.

It’s a sobering look back at a century and a half of chain gangs, segregation, the mythology of black criminality and the war on drugs. Hugely impressive interviewees make a compelling argument, in an important film that ought to be seen.

We couldn’t leave out Joe Exotic, now, could we?

“You know, the monkey people are all a little bit different; you know they’re kind of strange. But the big cat people are back-stabbing… pieces of shit.”

And so begins the phenomenon that is Tiger King – a documentary about feuding rival big cat breeders, murder for hire, and more. You really couldn’t make it up.

It sounds ridiculous, and it’s certainly completely mad, but you’ll get sucked into it just like the rest of the world if you haven’t taken the leap into Joe Exotic’s world yet. You have been warned.

A documentary for the YouTube age, this one isn’t for the fainthearted, but is revealing and fascinating nevertheless. The title refers to a seemingly anonymous YouTuber who puts up appalling footage of torturing and killing cats.

These clips are soon gaining many views, and a Facebook group of shocked viewers is formed to track the perpetrator down, to bring him to justice – and to stop him possibly committing even more shocking and vile crimes.

The group goes to the authorities with their findings, but are regarded by the police as cranks and misfits; until it finally becomes clear that they were right to be concerned.

A fascinating story of an extraordinary talent.

The story of one of music’s truly troubled souls, What Happened, Miss Simone? is a fairly by the books documentary – but you can’t really go too wrong with a character like Nina Simone, as her brilliance and music shine through everything.

A life filled with difficulties is traced with a vast amount of wonderful archive material and contemporary interviews; it’s the story of a fascinating life that frustrated the young Eunice Waymon from the start.

She yearned to be a ‘serious’ classical musician, but as a black girl in segregated North Carolina suffered instead from racism and discrimination at every turn. She would become, as Nina Simone, a major participant in the civil rights movement – which again set her all too often on a different path from financial opportunity, much to the annoyance of her husband and manager.

Legendary documentary maker Ken Burns and his long-time film-making collaborator Lynn Novick, turn their meticulous collective eye to the Vietnam War, in a 10-part series, made for PBS in the United States, that seeks to tell the story from both sides.

No longer required is Burns’s famous technique of injecting some movement into still photographs from the days of the Wild West or American Civil War. Now, of course, we are at a stage in history with plenty of archive moving footage to use – and lots of people to use as talking heads who were actually involved in the action.

This is a remarkable series that tries hard to tell the truth from both ends of the Ho Chi Minh trail, and seeks to educate and illustrate a history without bias. Superb.

It was a great idea: the world’s best, most fun, most ambitious, most exclusive festival. On a beautiful island. In the Caribbean. With and for the world’s most beautiful, desirable people. And the best DJs. And top chefs providing the food.

The problem with great ideas, of course, is that you also need great organisational, management and logistical skills to make the great idea a reality.

Fyre is the story of a great idea gone horribly wrong. A disaster of epic proportions is made all the more enjoyable to watch of course, because the festival-goer ‘victims’ are for the most part extremely privileged, entitled people – Instagrammers and 'influencers' who help to promote an event that becomes an unmitigated shambles – the organiser is ordered by the court to pay back more than $25million.

As always with these things, though, the real victims of the whole sorry affair are the locals who have to help out where possible, clean up the mess and, inevitably, also end up out of pocket for something not of their doing, and entirely out of their control.

Fyre is a salutary lesson for these social-media obsessed times – and very entertaining at the same time.

How To Fix A Drug Scandal

In the space of six months, two (unknown to one other) chemists employed to test illegal narcotics in Massachusetts court cases, were arrested – one for faking tests, the other for drug theft and evidence tampering.

These two cases set in motion a chain of events in the New England state that would bring into question the verdicts of more than 20,000 convictions from the previous years.

This four-parter looks at the two cases in detail, but also then takes things further by investigating a system of injustices in the ‘war against drugs’ that exposes some extremely uncomfortable truths for the Massachusetts state attorney general’s office. A rather scary look at a system that seems rotten almost to the core.