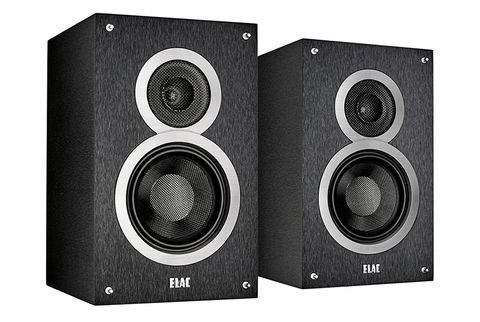 Some real expertise on display, but not the all-round game to worry the class leaders

There’s a time and a place for innovation in the hi-fi industry, for tearing up the rulebook, for blank-sheet thinking and all the other exciting-sounding initiatives that indicate a break from the norm.

There’s a time and a place all right, but the budget end of the loudspeaker market is not it. The need to bring a worthwhile speaker to the masses at an affordable price means there’s no point (or profit) in going off-piste.

That why Elac’s Debut B5 standmounters look the way they do.

To be fair to Elac, the Debut B5s are, in terms of their showroom appeal, build quality and finish, entirely competitive. Exposed pins on the speakers’ front panel for attaching the (black, cloth) grilles look a little prosaic, but the textured/brushed vinyl wrap (just one finish is available) adds a little more tactility than most rivals can muster.

They’re absolutely par for the course in terms of specification, too. The cabinet dimensions are utterly unremarkable for a product of this type. The deployment of a 25mm cloth dome tweeter (safe behind its fixed metal grille) and 13cm woven fibre mid/bass driver is fairly standard too.

So with configuration and build well up to the norm, all the Debut B5s need do is show the competition a clean pair of sonic heels and the job’s done.

But, of course, the market is at its most competitive here – the likes of Q Acoustics, Monitor Audio and others are all vying to be your first system/micro-system speaker upgrade, and £250 or so buys some startlingly capable efforts.

Elac has its work cut out to stand out from the pack.

Positioned reasonably close to a rear wall (where the Debut B5s’ swift and textured low end gains welcome body), toed-in just slightly towards the listening position and supported on some appropriately sturdy stands, the Elacs immediately reveal themselves as a well integrated, even-handed and impressively rapid listen.

Playing some late-period Johnny Cash (his version of U2’s One is poignant and authoritative, even if the Elacs do on occasion make his dentures all too apparent), the sound is sweetly communicative through the midrange and has just enough bite at the top end to prevent it becoming sugary.

Switch to Kedrick Lamar’s altogether heftier King Kunta and the B5s’ powers of focus and integration come to the fore. This is a wide, busy and relatively dense recording, one that requires real midrange dexterity and detail to properly transmit the malevolence of the vocal.

The Elacs are more-than up to the task, following the sinuous bassline faithfully and giving Lamar’s complaints real expression. The whole thing motors along at a clip, the speakers demonstrating timing the equal of any of their price-point rivals.

King Kunta also exposes the B5s’ relative lack of scale, and a rather pedestrian lack of drive. For all their sprightliness and ability to differentiate low frequency textures, there’s a palpable disinclination to sink their teeth into a beat and properly force the issue.

Authentically dynamic recordings like Gershwin’s Rhapsody in Blue or Underworld’s Push Upstairs simply don’t have the attack or scale required, leaving the field open for the Elacs’ more assertive rivals to make their case.

In terms of balance, integration and timing, the Debut B5s are among the best pound-for-pound speakers around.

Their shortcomings, though – while hardly numerous – are significant. Ordinarily, speakers that sound as small-scale as this are physically pretty small too – which brings advantages of its own.

The Elacs, though, simply sound smaller than they are, which isn’t that much help to anyone.